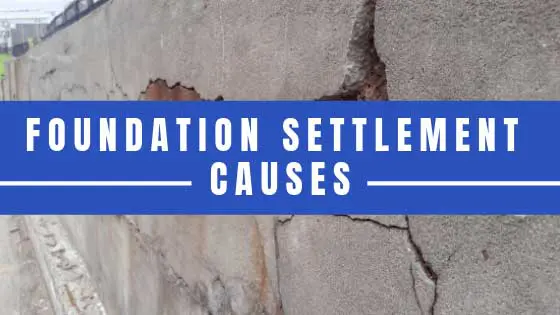 In this blog post, we’re going to talk about house settling, especially for newbies.

House settling is a common process that all homes go through. This process happens as the wood in the house dries out and adapts to its surroundings. The moisture content in the wood changes and this can cause shrinkage, leading to house settling.

So, what do you think house settling is normal? How long it lasts for, and when you should actually worry? That’s coming right up.

What is house settling?

There’s a lot of water, moisture in a foundation concrete, especially when it’s poured. It takes a long time for that water content to come out. As that water is coming out, you know, there will be shrinkage, and it’s very normal for houses to settle. Going through and basically finding where it is and sitting in its place.

What is shrinkage for house foundation?

So when a new homeowner comes into a home, and when he says shrinkage, what does that mean?

Well, the shrinkage means like you know wood has a lot of moisture in it, meaning you bring it from the forest and you bring it in and you put it through its process, it basically goes through almost like a oven and it brings it down.

Kiln dried materials is typically in around the 13 to 19 percent range for lumber and you want— the idea is to bring it down to the best conditions to work into it, but again it depends on the environment. Calgary’s a very dry climate, Vancouver is a very moist climate, so relative humidity can be much different, and from that what happens is the wood shrinks when you’re screwing in drywall into wood, basically what happens is it’s a metal screw or metal nail and then what happens is the wood starts to shrink of a sudden, it starts to move and you can see some slight cracks or popping and nails and screws.

Will you see your house actually maybe shift or…?

In Calgary in particular, because we have four distinct seasons, you want to go through all four seasons so it really adapts to all the different seasons from the different humidity level. Obviously, the winter is going to be much different, typically dry in Calgary, where June can be very moist, you know? And it really has to adapt to those surroundings.

You know, you want to go through that and you’ll all see cracks there for, you know, a lot of builders- reputable builders will come out at the end of the one year or even two years and do a lot of repairs on the drywall cracks. It is actually quite common for builders to do that.

How much foundation settlement is acceptable?

Sixteenth of an inch is pretty acceptable measurement, and then usually, especially with drywall cracks, anything that’s more than about twelve inches long typically is what they consider it out of normal.

How long does a house normally settle for?

A house normally settles for a year, but— it does even more than that. I mean—well, typically a house can settle—I mean it can be moving—it really is a living organism, I mean it’s no different than anything else, we’re part of a planet and you know, there’s always moving and everything going on, but the most majority of settling happens in the first year, and again it’s that whole cycle of going through four seasons and being able to put it in one place.

You got to remember all the materials are being brought in from sometimes all over the world, but certainly all over North America, and they are brought into one location and now they’re being fixed in one spot, and now those are now coming together and basically being one unit or one big building.

So, how would we know the difference between say normal house settling and actual foundation issues?

One thing that’s a very common misconception is concrete, typically people get nervous when they see cracking any kind of concrete they see, but typically it’s exactly the opposite.

Concrete typically will crack, if you don’t have cracking it’s very unusual, so it’s very common. It’s really about the magnitude of the cracking you know, again that’s sixteenth of an inch or an eighth of an inch with you know, and for a long period or long spans can be the concern, you know, real major foundation cracks you’ll typically see walls with major crack in them at the corners of doorways or windows.

Again, I know people will worry about that but most reputable builders take the time to make sure that their foundation is built on solid ground.

There are things like we call soil bearing tests which makes sure that it’s all built properly on proper ground and it’s all checked beforehand.

Any reputable builder would be taking that step to do that and it’s not as much of a worry as people think it is, plus the evident on warranty again- they have or through the mandatory warranty through one, two, five and ten year program. There’s a ten-year structural program or warranty to that and the bottom line is that you’re covered with that on any concerns that may come about.

Is there any point when you should actually worry?

I guess I’ve never seen it.

But no, I mean if you saw physical moving you can actually physically see. Again I would say it’s so rare, typically if you’re going to see any movement it’s going to be in the first year to something coming up after 10 years it’s very rare, like I mean you’re probably talking-I’ve only heard about a couple times in all the time it’s happened so it’s very-very rare and again you can-there’s always solutions to it you know, whether it’s mud jacking which means you’re putting you’re pouring basically fresh concrete in and trying to raise the house up, there’s always solutions that can be found out to make these things work.

People can worry but there are solutions, I mean it can be expensive but I would also say for the most part you’re generally covered one way or another by somebody.

What are some normal noises when the house is settling?

Well again when you have wood connecting with metal or concrete kind of connect with wood, you know you’ll often hear pops you know or you know things like that, especially people moving into their house you can hear trusses, there’s an enormous amount of material- wood material in that and they’ll hear pops coming from the roof and or you know-their ceiling and that’s very common for it to happen you know, you’ll hear shifts, you might step somewhere, a little creak here and there, very common for those kind of things to occur.

Again it’s just the house going through its movement, to try and figure out where it needs to be. Great! Do you have anything else to add in terms of house settling?

I think the big thing is that I think people worry about it a lot but it really is a natural part of it, I mean it’s no different than a human being. I mean we go through changes and a house goes through changes, and we’ll always go through changes and for people to understand that it’s very important that I think they oftentimes we feel like we’re building a house is it’s like a diamond, it’s not perfect. It’s so many people involved in it and there’s some things that can occur so it’s important for people to know that that does happen

No comments to show.